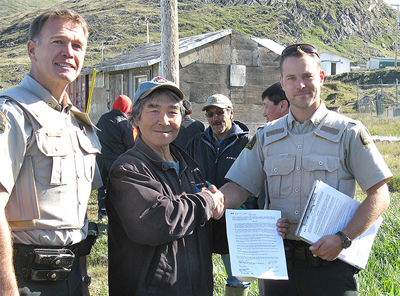 Fisheries and Oceans Canada has the mandate to implement programs with a view to integrating Aboriginal communities into the fisheries, in accordance with current treaty requirements and decisions of the Supreme Court of Canada. These decisions were based on current treaties and recognized ancestral rights.

In Quebec, the Department Is:

Marine mammal management in Northern Quebec is also an important part of the Aboriginal Fisheries Division’s mandate. Partnership agreements with the Nunavik Inuit allow a collaborative approach to managing different species, in particular the beluga. Beluga is an important part of the Inuit populations’ subsistence. In Nunavik, two concentrations of beluga, that of Ungava Bay and that of Eastern Hudson Bay are considered as being endangered by the Committee on the Status of Endangered Wildlife in Canada (COSEWIC).

Over the years, the Supreme Court of Canada has clarified certain aspects of Aboriginal rights and treaty rights in respect of fisheries. The main decisions that encouraged the development of Aboriginal fisheries are the Sparrowdecision in 1990 and the Marshall decision in 1999, which led to the introduction of new programs. Also, the Powley decision deals with Metis rights while the Taku Haida and Mikisew decisions address the importance of consulting the First Nations under certain circumstances.

Current treaties in connection with our operations:

Please note that the Beluga Harvest in Northern Quebec report will soon be available in a format in line with the new management system of beluga hunting recently approved by the Minister.